William Patry gave the SCL Lecture to 200 eager and appreciative listeners at the IET on 24 March.

In the SCL Annual Lecture for 2009, leading copyright expert William Patry made a stunning intellectual case for a new approach to copyright law – crafting effective law, not aiming for the ‘strong copyright law’ which had become a ritual aim for many. He emphasised the dangers of allowing ideology to rule over empiricism when determining copyright law – citing our recent love affair with economic freedom by way of warning. William Patry went on to surprise many by his emphatic rejection of an approach to copyright which classified it as property. He sees it as a creature of a government programme, and believes that that should bring with it an approach akin to that applied to government housing or educational initiatives. In fact, the copyright debate is dominated by references to moral cases and what is right and just, with scant account taken of the public interest or economic realities.

The evening began with a tribute to Professor Sir Hugh Laddie by the Rt Hon the Lord Hoffmann. He spoke with real fondness of his relationship with Sir Hugh and the effect he had on all he met: ‘meeting him added sparkle to one’s life’. He referred to Sir Hugh’s ‘zestful brilliance’ and the pleasure that he had gained from working with him. As a judge, Lord Hoffmann felt that Sir Hugh’s quickness of mind had sometimes left counsel trailing in his wake and the acres of common sense that were displayed in his judgments sometimes put him at odds with the European Court. Lord Hoffmann said that there was true scholarship present in all he wrote, even his last piece – a 36-page demolition of one of Lord Hoffmann’s own recent judgments. But, recounting tales of successful fights together in copyright cases, what would stay with Lord Hoffmann was his recollection of Sir Hugh’s wit, sparkle and fun.

In the lecture itself, William Patry began with scarcely a reference to copyright – but foxes and hedgehogs, Theodore Rothke, Greenspan at the Federal Reserve and trickle-down economic theory were all mentioned. The references to the roots of the current financial crisis were relevant to show that public and private interests were not co-terminus and that a ‘hands-off’ approach to copyright was doomed. The absence of empirical analysis of copyright incentives clearly astonished William Patry. Increases in copyright term in the USA were granted without any attempt to study the effects of earlier increases. But William Patry gave credit to the UK for its detailed analysis – the Gowers Review – which had involved a proper analysis of the effects of a further extension and had then recommended against extending it. The credit to the UK was short-lived as ministers had since cited the ‘moral case’ for extension and embraced extension on non-economic grounds. William Patry’s view of that change in position appeared to be one of polite contempt. 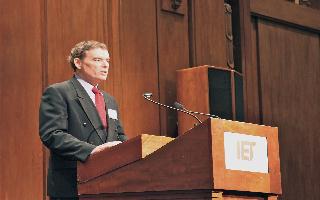 The audience was then taken on a tour of copyright history with special emphasis on its origins in the UK. Lord Macauley’s speech to Parliament in 1841 was cited as the source of much of William Patry’s own views on copyright. In a digital age, those who practised in the field of copyright had to remind themselves of its roots. If expediency was at its heart, it was clear that the term was already too long and that a system which even allowed copyright owners to dictate the design of consumer electronics had lost sight of what copyright should be for.

William Patry felt that copyright law was currently ineffectual. He quoted Sir Hugh Laddie: ‘Where IP rights perform their function of advancing the science or arts, they should be encouraged to do so. Where or to the extent that they do not, they have no justification and the normal discipline of competition should apply. The gluttony which has resulted in the growth of completely unnecessary or excessively long IP rights undermines the system itself. As Shakespeare wrote in Richard II, “With eager feeding food doth choke the feeder.”’

William Patry concluded by saying that those who cared about copyright law needed to see that it had to be put on a diet.

In response to questions, William Patry depressed the audience with his frank but despairing view on the likelihood of persuading politicians of the need for an empirical approach – he had no hope of that. He responded to a question about illegal downloads with a condemnation of such behaviour but a call for the music industry to recognise that the current system was failing and for them to show greater alacrity than they had hitherto in adapting to the technology and new consumer demands. William Patry responded to a question about the alternative analysis to copyright as property with an interesting reference to tort, suggesting that as the historical base for the origin of the right.

In giving his vote of thanks, SCL Trustee Roger Bickerstaff reminded the audience of the close relationship between IT law and copyright – that copyright was at the root of so much of what an IT lawyer did. He referred to a practical instance of the dangers of ideology in the context of open source and cited that as an instance of how more open-minded approaches to copyright might lead to a prosperous outcome.

Following the lecture, the debate continued long into the night at an excellent reception in the stunning Riverside Room of the IET.

A recording of the Lecture is now available online.